Despite the vast differences between South Africa and Denmark, their economies have followed an astonishingly similar trajectory over the past six decades. However, the South African economy is in need of reform if it is to continue to keep pace with that of its Danish co-runner.

Much water has passed under the world's bridges since Elvis crooned "It's Now or Never" in 1960. But two waters have remarkably followed the same course: the Danish and South African economies. The South African economy today, measured in GDP, is only some five percent bigger than Denmark's, just as it was 60 years ago. Since then, both countries have had their ups and downs, but have still been fairly well aligned. 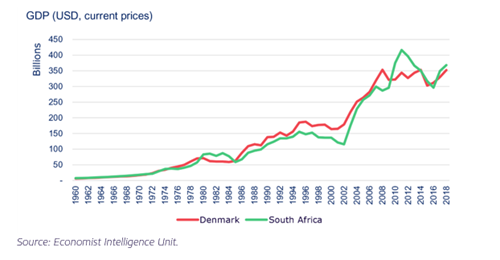 However, despite this striking similarity, the two countries could hardly be more different. Firstly, in terms of both landmass and population size, with South Africa exceeding Denmark 28- and 10-fold, respectively. Secondly, in terms of their economic structure. South African exports are based largely on mining because the country is rich in gold, platinum, diamond and coal reserves, and on heavy industries such as steel-making and car-making. As such, the South African economy moves to a completely different beat to that of Denmark, where the service industry's transport and IT, and pharmaceutical products keep the wheels turning.

Naturally, it should be mentioned that the rapid population growth of South Africa means that the living standard per capita has not increased as much as in Denmark since 1960.

Now, changes need to be rung in the South African economy. One key challenge for President Cyril Ramaphosa is to regain the growth of former years and restore the economy after years under the corrupt rule of his predecessor Jacob Zuma. During Zuma's term in office, the country's institutions were gradually depleted to fund the president's extravagances. In fact, to find growth rates topping two percent, we have to go back to 2013, and with an unemployment rate of 29 percent, there is now a dire need to crank up production.

Nelson Mandela's harmonious rainbow nation of equal opportunities for all, has remained but a vision

Another challenge is the persistent inequality, where South Africa again stands in stark contrast to Denmark. The Gini-coefficient, a measure of economic inequality in a population, reveals, unsurprisingly, that Denmark is one of the world's highest scorers in equality, while Nelson Mandela's harmonious rainbow nation of equal opportunities for all, has remained but a vision. South Africa is probably the country in the world with the greatest inequality, and where great differences exist between black and white people.

Grappling with these challenges is nothing new for the South African government. Its Black Economic Empowerment programme aims to reduce post-apartheid class divides and to generate economic growth by helping black citizens up the social ranking scale, for example, by means of positive discrimination in public-sector employment and land ownership.

It's now or never

South Africa is also struggling with its high numbers of civil servants and an inflexible labour market, two of the root causes of the increase in government debt from 35 to 58 percent of GDP in the space of a decade. This debt level is beginning to erode the country's external ratings.

Cyril Ramaphosa may be hearing the strains of Presley's hit from 1960 urging that 'tomorrow will be too late', given the plans announced for major multi-annual investment in South Africa. The development of renewable energy is high on the agenda in a country beset by frequent power cuts owing to the lack of electricity generation capacity to meet demand.

Within wind energy alone, the plan is to contract approx. 1,600 MW capacity annually from independent power producers over the next decade. This equates to supplying just over a million South African homes annually with green power. These plans hold bright prospects for Danish exports.

The procurer of all this electricity is ESKOM, the state-owned power utility. With its workforce of 47,000 and involvement in everything from electricity generation, transmission and distribution and sales to subscribers, this is literally a national powerhouse.

Unfortunately, the creditworthiness of this state monopoly is at an all-time low, and ESKOM frequently needs bailout funds, most recently this year. Any investment in wind will require assurance that the buyer is good for the money. This is one of the challenges EKF helps companies overcome.

As one of the most stable countries in the Middle East, Jordan plays a key role for the West. But the stability falters.
News

EKF, Denmark’s Export Credit Agency, has been given a decisive role in the government’s ambition to spread Danish climate technology to the rest of the world.