Lebanon – on the brink of bankruptcy

Burning tyres, tear gas and water cannons – all regions of Lebanon have been turned into something akin to a war zone. But the vast majority of the demonstrations have been peaceful, and the festive Lebanese are not averse to combining protests with street raves. After all, the recent days' unrest are as nothing compared to the grenade and sniper attacks they faced during the 15-year civil war that ended in 1990.

However, the demonstrations are a manifestation of the severe economic crisis and a general sense of disaffection. The Lebanese are protesting against rising prices, rife corruption and the political elite, but the final straw was a bill for a tax on WhatsApp, the popular internet call service. 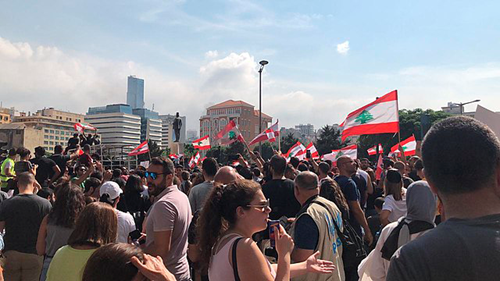 The demonstrations pressured Prime Minister Harris into resigning on Tuesday. But major structural change is not on the cards, since the political system has a religious-sectarian basis involving fixed-quota allocation of key positions of power among the country's religious groups. The aim of this is to keep the peace by maintaining an acceptable balance of power between the three main religious groups: Christians, Sunni and Shia Muslims.

Regardless of whether or not they form a new government right away, which is not the practice in Lebanon, or they face a long-lasting political stalemate, it will be difficult for the government in office to meet the protesters' demands. This is because the Lebanese economy, like the bumble bee, manages to stay aloft when in theory, it shouldn’t be able to. Public debt at 150 per cent of GDP almost matches the Greek debt ratio, and is still rising. For years, the country has been constrained by a fiscal deficit, with servicing of the public debt alone draining 45 per cent of government revenue. The situation was further aggravated when the previous government, as of now, earlier this week made a bid to concede to the protestors' demands with a tax on banks, which will undoubtedly stall investment and growth.

Add to that the non-disbursement of a substantial USD 11 billion stimulus package from 2018, from the likes of the World Bank, the EU and the Arab oil states that was conditional on public cutbacks of 1 percent of GDP annually for five years, which the government failed to achieve. The low-cost loans in the package were earmarked for investment in the infrastructure and power supply that would boost growth.

Two factors account for why Lebanon is not already bankrupt: For decades, the country has had access to low-cost loans from the wealthy Arab oil states. Also, Lebanon is a popular holiday destination for wealthy Arabs, who have therefore had an interest in subsidising the country.

Financial support from the Arabs is also a tactic to reduce the influence of Iran, which supports the Islamist Hezbollah organisation. However, due to falling oil prices, the wealthy oil states no longer have the same means to subsidise the Lebanese economy.

Moreover, for decades, currency has been flowing into the country from the Lebanese diaspora, which has deposited its savings with Lebanese banks at very favourable interest rates. These remittances have been used by the banks for buying up Lebanese government bonds in order to finance fiscal deficits. The steady stream of remittances has also enabled Lebanon to peg its currency to the dollar. However, those remittances are starting to dwindle, and if the country fails to drastically cut public spending, there is a severe risk of a currency crisis and national bankruptcy.

Consequently, there is every indication that the Lebanese population is set to face even greater austerity in the coming years and that civil unrest is likely to escalate.

The leftist president, Andrés Manuel López Obrador, has been in power in Mexico for just 10 months, but his popularity in the Latin American country is sky-high.
Article

Challenges behind the Chinese anniversary

On Tuesday, China will be marking the 70th anniversary of the founding of the People's Republic.