Home
What We Do
Become an expert in export
Inspiration centre
Country columns 2019
Jordan: The Middle East's stable country falters

As one of the most stable countries in the Middle East, Jordan plays a key role for the West. But the formerly so-popular King Abdullah has fallen out of favour and is seeking to avert public protest against economic stagnation and massive refugee flows.

Caught between some of the most conflict-ridden countries in the Middle East, over the past decade, Jordan has suffered severe knock-on impacts from the region's civil wars and refugee flows.

This has caused what was formerly a growth economy to stag-nate, and is threatening to upset the country's political stability. 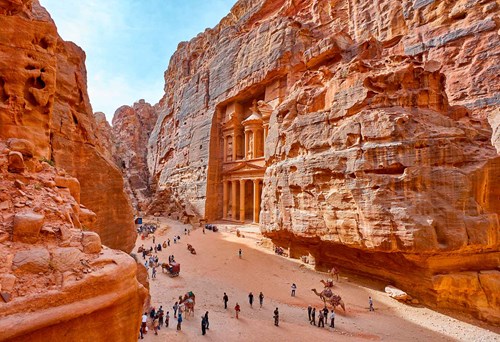 The Petra Treasury in Jordan

Jordan's King Abdullah is struggling to overcome tall challenges in attempts to restore the economy in what was historically one of the most stable countries in the Middle East.

The King retains relative popularity among many Jordanians, who hold out the hope that he will be able to usher in better times ahead, as he did in the past.

When he came to power in 1999, he set about liberalising the economy, which resulted in booming growth in the 00s with annual growth rates averaging eight percent.

However, the financial crisis in 2008, followed by the Arab Spring in 2011 put an abrupt end to Jordan's economic progress.

To make matters worse, the country has had no choice but to host hundreds of thousands of refugees from neighbouring Syria. In proportion to the size of the country, only Lebanon has received more refugees.

The refugees head for Jordan owing to its long history of being the Middle East's 'safe haven'. As far back as at the creation of the State of Israel after World War II, Jordan became a sanctuary for a large number of displaced Palestinians.

Overall, the economic slowdown has caused unemployment to almost double to 19 percent in the space of a few years

Besides which, for years, the Jordanians have enjoyed levels of freedom seldom seen in the Arab world. According to the NGO Freedom House, of the Arab League nations, Jordan is the fourth-most 'free' measured in political rights and civil liberties, and is surpassed only by Tunisia, Morocco and Lebanon.

However, the massive influx of refugees and the country's economic stagnation have sparked unrest and protestors have taken to the streets. King Abdullah's control is no longer as assured as it was formerly.

The population is seeing all the signs of expenditure on the many refugees draining the national economy. Jordan has also increased its military spending, which means even less money for healthcare, social security, infrastructure and other public-sector investment.

Furthermore, the economy is suffering from the fact that instability in the Middle East has caused tourists and foreign investors to shy away from Jordan.

Overall, the economic slowdown has caused unemployment to almost double to 19 percent in the space of a few years, while the national debt has shot up from 65 percent of GDP in 2009 to 92 percent in 2018.

The pressure on Jordan's fiscal positions have spurred the government, which is in effect appointed by King Abdullah, to introduce structural reforms.

The reforms are a requirement from the International Monetary Fund (IMF), which, in 2016, granted an extended fund facility to Jordan.

However, the government is slow to implement the reforms because they are unpopular with the general public. In 2018, demonstrations against a tax reform caused former prime minister Hani Mulki to resign, and the protests have continued under his successor, Omar Razzaz.

This may result in sound export opportunities for Danish companies, which rank among global leaders in wind, solar and biomass

King Abdullah is, however, trying to pour oil on the troubled waters by going against the IMF austerity measures. Recently, the King called for public-sector salaries and pensions to be increased, which will further constrain the public purse.

Meanwhile, the Minister of Finance has pledged that there will be no more tax increases in 2020. In this way, the authorities hope to prevent mass demonstrations along the lines of those seen in Iraq and Lebanon this year.

Key role for trade with the West

By virtue of the country's stability, Jordan plays a key role in mediating Western influence in the region, which thus gives it relatively ready access to low-cost loans from Western donors.

Major multinational institutions such as the European Bank for Recon-struction and Development are already actively involved in financing ventures such as renewable energy projects.

This may result in sound export opportunities for Danish companies, which rank among global leaders in wind, solar and biomass.

Unlike other Middle-Eastern countries, Jordan has only scarce natural resources, and the object of the investments in renewable energy is to cut back the country's oil imports.

Moreover, owing to its arid climate, Jordan is affected by water shortages and is therefore also investing in water supply projects. Here too, Danish technology could play an important role.

Vietnams growth entails a colossal need for energy, which Danish exporters should have an opportunity to cater for.
Article

This weekend, a Danish delegation will be flying to Colombia to meet with some of the country's meat producers, who have an interest in tapping into Denmark's world-famous farming know-how.