This weekend, a Danish delegation will be flying to Colombia to meet with some of the country's meat producers, who have an interest in tapping into Denmark's world-famous farming know-how.

With pigs outnumbering its human population by roughly two to one, Denmark holds a very special world record. With that many pigs in the country, we have to excel in animal husbandry.

Denmark has accomplished this beyond compare to make Danish farming practices famed worldwide for being among the most efficient and scientific. This excellence has not gone unnoticed in Colombia either, where the market for production of pork and chicken meat is growing. 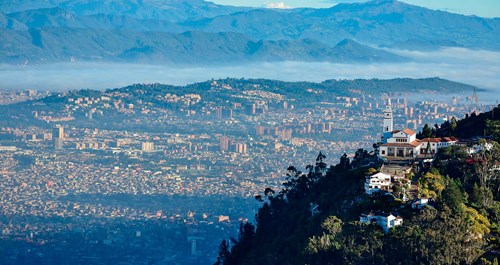 The Colombians are aiming to be self-sufficient in produce, and also looking to export more meat to China, another major market for Danish pork exports. To achieve those aims, the Colombian producers need to raise their food safety standards.

The visit by a Danish delegation representing the Confederation of Danish Industry, Danish Agriculture & Food Council, EKF and a number of businesses specialised in the agricultural and food industry this weekend to meet with Colombian meat producers with their sights set on Danish equipment and know-how therefore promises to be a productive match.

In addition to the needed know-how, the delegation will also be promoting a financing concept called Shopping Lines, which is a type of loan that will enable Colombian businesses to secure competitive financing for purchasing Danish technology.

The Danish exporters will be visiting a fairly favourable market in which to conduct business. On the back of several years of economic growth, and boosted by oil exports, investments in infrastructure and a decent increase in household private consumption, Colombia's economic growth is forecasted to continue. Unlike in several other countries in the region, Colombia is also adept at managing its national economy, with acceptable public debt and inflation.

Generally, however, Danish presence in the country has been barely noticeable, not least because Colombia, until a couple of years ago, was synonymous with armed conflicts with the Marxist-Leninist guerrilla group FARC, kidnappings and cocaine smuggling.

The business climate is viable, and the country's ambitious growth plans may hold sound opportunities within renewable energy, infrastructure and tourism

That changed, however, in 2016, when the government concluded a peace accord with FARC, which restored international investor confidence in Colombia. Free-trade deals have been signed with the USA and the EU, and Colombia will shortly accede to the prestigious multilateral economic organisation, the OECD. OECD has consequently set out a number of proposals for how Colombia can increase its macroeconomic resilience, foster a more favourable business climate and reduce poverty and inequality.

Flare-up of past problems

However, it's not all bliss and peace. Under the peace deal, FARC was promised political influence with ten seats in parliament, but President Ivan Duque, who took office in August 2018, was against the deal from the outset. Recently, this provoked the FARC guerrillas' former second-in-command, Iván Marquez, to broadcast a video in which he threatens to resume armed struggle against the government.

The peace deal with the FARC has also created a power vacuum in FARC territories, in which new illegal factions are now causing unrest. The tensions are compounded by the influx of refugees from neighbouring Venezuela, which is in economic collapse.

The deteriorated security situation has tarnished President Duques' popularity. In late October, his party suffered a major setback in the local polls in Colombia, and lost the mayoral posts in Bogota, the capital, and in several other cities.

Nevertheless, the overall impression of the Colombian market is positive. The business climate is viable, and the country's ambitious growth plans may hold sound opportunities within renewable energy, infrastructure and tourism.

The Polish economy is booming and sending its total energy requirement soaring.
Article

Argentina: No room for wrongfooting in an economic tango

Argentina's newly-elected president faces a tall task in getting a grip on the economy.