Home
What We Do
Become an expert in export
Inspiration centre
Country columns 2019
Algeria: political turmoil and economic challenges

Newly-elected president has vowed to reform the economy of Africa's largest country.

2019 was a watershed year for Algeria. The dramatic events escalated in February this year when large crowds of demonstrators protested against ageing President Abdelaziz Bouteflika. By April, the protests had forced the president to resign after 20 years in power.

Public discontent was spurred by the country's ailing economy, which has sent unemployment soaring, especially among the under-30s, who represent more than half the population.

In the presidential elections finally held on 12 December, former prime minister Abdelmadjid Teb-boune was voted in as Algeria's new president. With this, the authorities hoped to have quelled months-long demonstrations.

So far, however, Tebboune's election victory has done nothing to appease protestors, since he is seen as part of the political elite that has controlled the country for years. 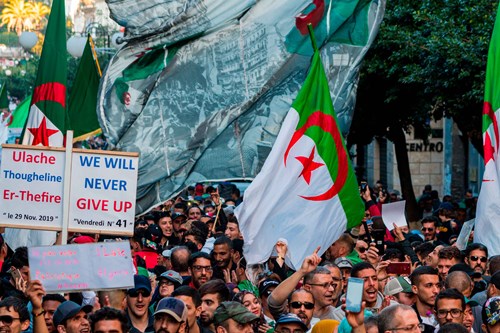 Protestors have also denounced the entire electoral process, in which the powerful military played a decisive role. Many people in Algeria decry the elections as undemocratic, claiming that the coun-try's elite and military chiefs controlled the polls to retain their political power.

Tebboune will certainly have his work cut out for him, since aside from its political divides, Algeria is also struggling with severe economic challenges. Implementing economic reforms is no easy task in the face of fierce public outcry.

The Algerian economy is constrained notably by government retention of a large number of inef-fectual state-owned enterprises, and a financial sector dominated by government-controlled banks. Meanwhile, inflexible local legislation makes it difficult to attract private investors. However, these restrictions are expected to be eased in 2020.

The current challenges date back to the independence won from France in 1962. In its colonial past, Algeria had major exports of primary produce to Europe, but the new government neglected the agricultural sector in favour of industrialisation and mass rural-urban migration.

However, close proximity to Europe continues to hold excellent export potentials, and Algeria boasts an abundance of oil and gas reserves, which account for 60 percent of national revenue and 95 percent of export revenue; so much so that hydrocarbons yielded surpluses on the balance of payments right until the oil prices collapsed in 2014.

But rather than invest the hydrocarbons revenue in diversifying into new sectors, the money was spent on subsidies to lower the price of basic commodities. These subsidies are responsible for persistent fiscal deficits, but are difficult to remove, since the poorest will be hardest hit.

Despite its economic hurdles, Algeria holds many opportunities for Danish exporters. A Danish del-egation of eight agrifood businesses visited the country in October. The Danish agribusiness dele-gates see bright prospects for exporting equipment to boost agricultural efficiency and food pro-duction in the country.

The hope is that Danish exports to the agricultural and food sector, currently worth DKK 160m, are set to increase in the coming years

This is because Algeria is now committed to generating growth by modernising its agricultural and food sector. The challenge lies in the fact that almost 40 percent of farmland is under state own-ership, while the remainder is largely owned by smallholders with scant access to loans and credits for financing the equipment that would yield higher returns.

Nonetheless, given the popularity of Danish companies in Algeria, the hope is that Danish exports to the agricultural and food sector, currently worth DKK 160m, are set to increase in the coming years.

Despite the vast differences between South Africa and Denmark, their economies have followed an astonishingly similar trajectory over the past six decades.
Article

As one of the most stable countries in the Middle East, Jordan plays a key role for the West. But the stability falters.