Uzbekistan charts a course towards opening and reform

On 20 October, Danish businesses will be geared up for an export drive to Uzbekistan. While reforms and high growth rates have created potential in this former Soviet country, there is still cause for caution.

Uzbekistan, a republic of more than 30 million inhabiting the vast Central Steppe, is no premier destination for the average Danish exporter. However, it still worth keeping an eye on, because since 2017, the once sequestered country has opened up to the world. Water, agriculture, infrastructure, mining and renewables are sectors in which Uzbekistan is developing and investing heavily. With that in mind, the Confederation of Danish Industry and EKF invited Danish businesses to take part in a virtual export drive to this Central Asian nation on 20 October.
.

Changes in the wake of the dictator's passing

The Danish businesses will be visiting a country undergoing a change process. Modern Uzbekistan gained independence following the collapse of the Soviet Union in 1991. The first 26 years of independence were stifled by Islam Karimov's iron grip, although the president did succeed in unifying a brand new state through its difficult transition. Against that, his regime edged out of the Soviet planned economy only partially and slowly. Political reforms were not forthcoming and human rights fell by the wayside, leaving progress at a standstill. Karimov's passing in 2016 saw the dawn of a new era, however. 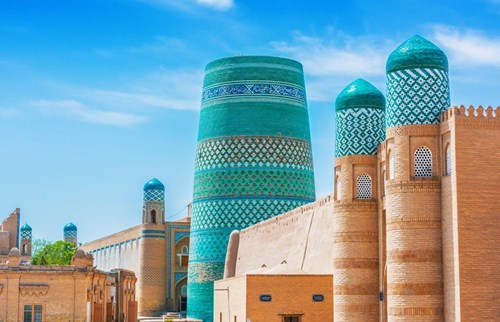 A major reform step was taken in 2017 under the current president, Shavkat Mirziyoyev, who was on a mission to phase out crushing currency control. Until then the currency had been strictly controlled with currency exchange and dividend payments in short supply, which deterred foreign investments. With liberalisation and 50 percent devaluation, interest in the Uzbek market has taken an appreciable upturn.

Encouraging take off point for reforms and investment

Uzbekistan now has a promising platform for reforming and opening up the country, and political oppression has eased somewhat. Under Karimov, the coffers were jealously guarded, meaning that at baseline the country has low sovereign and foreign debt. This has given it scope for borrowing abroad to finance investments. As an added plus, Uzbekistan has a young population, giving it a large workforce in line for future jobs.

As elsewhere, the COVID-19 pandemic has upset the apple cart, but unlike many other frontier markets, Uzbekistan rests on a healthier economic foundation. Following a dive in 2020, growth is forecasted to bounce back to five or six percent per annum from 2021.

Investments, reforms and high growth rates are opening doors for Danish exporters. The openings are in mining and clean renewable energy, as Uzbekistan has abundant mineral, wind and solar resources. Agriculture is a promising sector too, as Uzbekistan is a major producer of cotton and fruit and vegetables, although its production systems are inefficient and water-intensive. Improved water resource management will be a crucial step in modernising the country.

Reforms and a certain degree of political softening have patched over the worst political and commercial pitfalls. However, despite the hope of blue skies, Uzbekistan is still a market rife with commercial and political risks. This applies not least to its weak judicial system, high level of corruption, inadequate protection of property rights and its heavy bureaucracy. Meanwhile, widespread inequality and political oppression could spell political discontent. Moreover, there is a significant risk of the country becoming too indebted too fast and ultimately facing repayment problems. So far, however, the government has made only encouraging moves.

Hope for a fresh start in Argentina after debt restructuring deal

Argentina and a number of its major creditors have reached an agreement on restructuring the country's astronomical overseas debt.
Article

Despite promising economic development after its debt crisis, Portugal risks being set back many years by COVID-19.