The outcome of the second round in the Polish presidential election on Sunday is set to determine the country's future relations with the EU, energy supply, the independence of the judiciary and Danish opportunities for exporting to Poland.

The conservative incumbent Andrzej Duda won the first round of Poland's presidential election on 28 June, but fell short of the 50% he needed to win without a second round of voting. The presidential election run-off ballot on 12 July will pitch liberal Rafael Trzaskowski from the opposition, Civic Platform, against Andrzej Duda, originally representing the national-conservative Law and Justice Party, PiS.

Since 2005, the seven percent annual increase in Danish goods exports to Poland has been matched by only a few markets in terms of rate and constancy. The exports to Poland consist notably of wind farm equipment, consumables to a nation with rising purchasing power, and live piglets to the many large-scale Danish-owned pig farms in Poland.

Since the fall of the Berlin Wall, the Poles have enjoyed increasing prosperity owing primarily to prudent conservative economic policy. Polish accession to the EU in 2004 further boosted the country's economy.

The Polish boom has already benefited Danish exporters, but Danish exports to Poland are forecasted to continue to increase given the country's massive expansion plans within offshore wind energy and other infrastructure projects. Poland has many ageing and inefficient coal-fired power plants scheduled for decommissioning and replacement primarily by offshore wind turbines, and the country has plans to install more than 10 GW in offshore wind capacity. For comparison, Denmark total wind turbine capacity is 6 GW.

However, dark clouds are looming over the otherwise bright market outlook in Poland. The ruling single-party government led by PiS has held sway since 2015 with attempts to suppress both the media and the courts, which spells uncertainty surrounding the country's business climate. 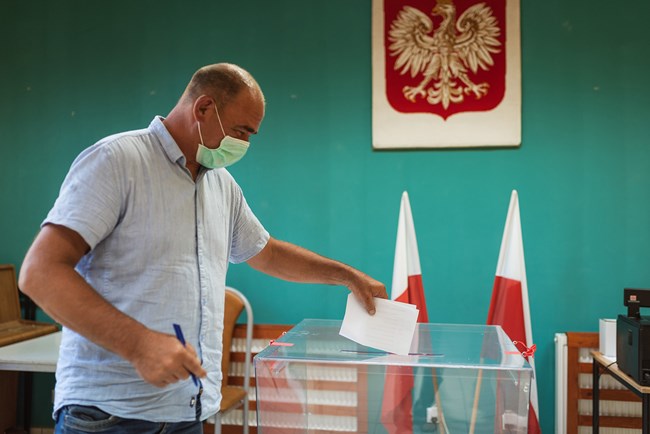 The political and legal uncertainties have impacted a number of foreign companies in recent years. An American energy company could only look on in astonishment as the Government's overturned a Polish Supreme Court decision to award the company USD 700 million in damages for breach of contract by two state-controlled Polish power utilities.

Similarly, Danish Terma was recently defeated by a Polish appeal-court ruling, which cost the hi-tech company a loss of DKK 134 million. Terma had sued the Polish Ministry of National Defence for breach of a public procurement contract.

This tendency is increasingly cause for concern among foreign investors and pro-EU Poles. The fear is that the confrontational stance of the ruling Law and Justice Party, PiS, could further impair Poland's standing with the EU, stalling the economic progress achieved in recent years. That fear has intensified in the wake of the coronavirus crisis.

There is therefore a good deal riding on the presidential election race on 12 July between President Andrzej Duda and Civic Platform candidate Rafael Trzaskowski.

Trzaskowski gained voter support in a short space of time for his focus on renewable energy sources, the reintroduction of the independence of the Polish courts and a plan for post-pandemic economic recovery.

Geographically, the two candidates have virtually split the country in two. Andrzej Duda's supporters are largely in the rural districts and the southern coal-mining regions, while Rafael Trzaskowski's main support is in the urban areas and the north of the country, where massive investments are expected in wind farms off the Polish Baltic Sea coast.

A number of news media see the presidential election between Duda and Trzaskowski as a poll for or against democracy in Poland. If Trzaskowski wins the election, he may veto the anti-democratic bills that might otherwise be presented by PiS in the upper and lower houses of Parliament. The media envisage that a victory for Trzaskowski would favour Polish Democracy and Danish exporters' and investors' business conditions in the country.

The world's fifth-poorest country has just celebrated 60 years of independence, and with major infrastructure projects on the drawing board there is now a basis for increased Danish presence.
Article

In South Korea, an ambitious clean energy transition to ramp up the economy could benefit Danish exporters.