Buffer-state Belarus could end up in high politics stalemate

The situation in Belarus risks ending in a protracted stalemate. This is detrimental for Denmark, since Belarus might otherwise have been a market with substantial potential for Danish exports.

In the wake of the past month's violent protests, de facto president of Belarus, Alexander Lukashenko, is now increasingly in the hotseat. Lukashenko has stated that he is willing to resort to the harshest means to quell public protests, and the armed forces have been put on full combat alert.

Russia has pledged military support for Lukashenko if needed, and has refused to engage in talks with the opposition. And as if it wasn't enough to have lost his legitimacy with the public, Europe's last dictator is also grappling with a beleaguered economy. 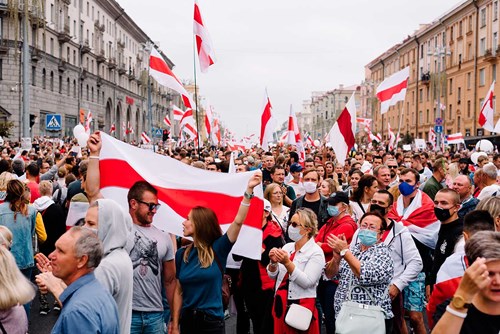 The leader of Belarus has many fires to fight. But is his hotseat about to topple or will it stay put as the pivot in a protracted play for high political power, underpinned by the mighty neighbour to the East?

Belarus is in recession, with growth expected to bottom out at -7.1 percent this year. The economy is only functioning by virtue of generous transfers, loans on preferential terms and subsidised oil revenue from Russia, and the country is therefore saddled with substantial external debt.

To make matters worse, Russia recently slashed its subsidies to Belarus, and estimates indicate that this will cost Belarus several billion dollars annually. Added to which, the ruble exchange rate has been in free-fall since the turn of the year.

Last Monday, the EU Member States held a meeting on imposing a number of sanctions aimed at 40 senior officials in the Belarusian regime. However, one Member State, Cyprus, refused to endorse the sanctions unless the EU simultaneously imposed corresponding sanctions against Turkey in response to disputes concerning gas drilling in Cyprus' maritime economic zone. No EU sanctions can be imposed without unanimity.

Economic crises are nothing new for Lukashenko, but in both the present and past crises, the leader has categorically declined to seek IMF assistance, as this would be contingent on the introduction of structural reforms.

Cap in hand to Putin

This is why Lukashenko has no other option but to go cap in hand to what is now his only ally, Vladimir Putin, who has declared his support for Lukashenko. Putin has warned the West against meddling in the situation in Belarus, which serves as a key buffer state for Russia against the West.

As such, Lukashenko's hotseat is a stool teetering on three legs: the loyalty of the police and the armed forces plus Putin's goodwill. Obviously, Putin's backing does not come free either, since it will presumably be at the expense of Belarus integrating even more closely with Russia by way of full tax and regulatory integration and a common currency, for example.

The opposition fears that it will not be possible to roll back any deals struck on increased integration with Russia. Behind closed doors, the Moscow Kremlin is now deliberating on Russia's next moves, the great conundrum being that there is no obvious successor to Lukashenko.

Here and now, the most likely scenario will see the conflict drag on in a protracted stalemate. Russia prefers to be indirectly involved as opposed to deploying military support, and the West will only impose the toughest sanctions in a worst-case scenario.

There is consequently no immediate risk of further East-West polarisation, and the risk of economic collapse in Belarus is still low.

A stalemate is detrimental for Denmark's opportunities for trading in Belarus because there is great potential. A heavy industry still run as in the Soviet Era, and an agricultural sector severely in need of modernisation and an efficiency overhaul would be among the obvious market openings for Denmark. But much will need to change before Denmark can export to Belarus without running substantial political and economic risks.

Denmark's green future fund is in operation: EKF has the first projects in line

EKF has been allocated more than half of the funds, DKK 14 billion, in Danmarks Grønne Fremtidsfond ('Denmark's green future fund').
News

With a profit of DKK 486 million, EKF performed well in the first six months of a year in which the COVID-19 crisis created a new reality for Danish export businesses.