The Luanda Leaks reveal the fate of a nation where, for many years, a small elite repressed the country in poverty and corruption. However, with political developments now more favourable, Danish companies could play a role in bringing Angola back on track.

Ostensibly, it was a story to outshine any boast from the successful entrepreneurs in the international 'Dragons' Den' investor-vs-start-up reality show: a self-made billionairess, who had worked her way to the top of a male-dominated business world, and that, in an African country riven by poverty, corruption and civil war.

But more than 700,000 tell-tale documents in the Luanda Leaks exposé blow the whistle on a different story. They reveal that the rise to fortune and fame of Africa's wealthiest woman, Isabel dos Santos, was enabled by wheeling and dealing in the oil and diamond industries where she channelled government funds into her own ventures and away from a population in dire need.

Isabel dos Santos is the daughter of former president José Eduardo dos Santos, who left office in 2017 after 38 years in power. She spearheaded Sonangol, Angola's vast state-owned oil company, mingled with Hollywood legends on the French Riviera, and avidly documented her life in the fast lane in the social media.

A country of contrasts

The Luanda Leaks paint a picture of a country with a staggering divide between the haves and have-nots. Because while Isabel dos Sandos was living it up in first class, a large proportion of the population was, and is, struggling on less two dollars a day.

Angola should otherwise have been one of Africa's wealthiest countries due to its abundance of natural resources of oil, diamonds and gold underground. However, these natural resources benefit only a small elite, while the rest of the population is consigned to poverty. Widespread corruption, weak national institutions and ill-advised leadership are some of the key factors in this imbalance. 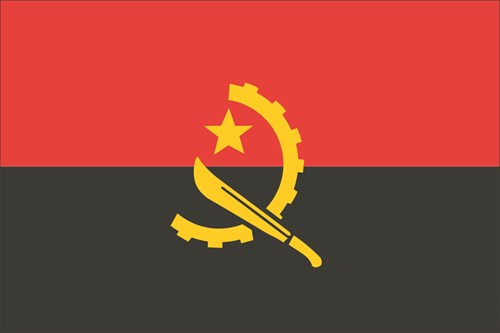 Glance at the country's flag, and the contrasts continue: the machete symbolises agriculture, while the gear wheel is an emblem of the country's industry. However, both sectors are heavily under-developed owing to the focus on the vast oil resources.

Developing economies know this phenomenon as the 'Dutch disease' or 'resource curse', in which a prominent industry attracts investments and the brightest minds to the detriment of the competitiveness of other sectors in that country. This renders the country inordinately exposed to the market trends of this one resource.

Angola owes exorbitant amounts to its lenders. Its national debt has escalated to 110 percent of GDP, which is disastrously high for a country at a low stage of economic development. Oil revenue accounts for 90 percent of Angolan exports, which makes the steady decline in oil production from 1.8 barrels per day in 2015 a sizeable challenge.

Output is projected to drop to around 1.3 million barrels in 2022, or even more without investment in developing new oil fields. With an interest rate currently at some 35 percent of national export revenue, there is even less for investment and to improve conditions for the country's large population.

The political will to get the country back on its feet is alive and well, and Danish exporters could play a role in the comprehensive reform programme ahead

This state of affairs is scarcely improved by the fact that around 70 percent of the national debt is to China and 'commodity-backed'. In other words, the Chinese have collateral access to Angola's oil production in any default on repayments.

There are bright spots, however, in that José Eduardo dos Santo's successor to the presidency, João Lourenço, came into power in September 2017 on a mission to root out corruption and clean up the economy. Since then, he has been busy weeding out the former government's influence and appointing new people to key positions. In 2018, he applied for IMF assistance, and the word is that he is doing his best to adhere to the programme and implement the reforms from the IMF.

The political will to get the country back on its feet is alive and well, and Danish exporters could play a role in the comprehensive reform programme ahead. An EKF-financed Danish entrepreneur was involved in installing a transmission line in 2018 and has a new line in prospect.

Agriculture is also due for an overhaul after years of neglect. In fact, Angola was once so successful at farming that the country was self-sufficient, yet today the majority of food has to be imported. This is where Danish agricultural and food businesses would come into the picture. Angola, blessed by its many rivers and steep inclines, has exceptional hydropower resources and there are plans in place to enlarge existing hydropower plants. This is also one of Denmark's areas of strength.

With one of the world's poorest business climates and wretched economic conditions, Angola is not, however, set to be Denmark's next export boom destination. However, opportunities exist in the above-mentioned sectors for exporters that tread warily and take care to insure their ventures.