The corona crisis could potentially wreak even more havoc in Africa, owing to its fragile democracies and economies, than it has in the West.

While Westerners are hectically practising social distancing, hand disinfection and staving off irreparable economic damage, the spread of COVID-19 in the large continent south of Europe has so far been slow and stealthy. 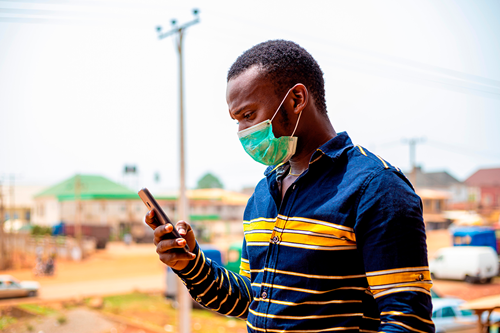 Africa has now reached 20,000 confirmed cases, and while the immediate crisis concerns public health and economic disruption, democracy and often fledgling civil liberties are likely to suffer in the longer term.

So far, encouragingly, the some 20,000 cases confirmed across the continent represent a modest toll. This may be due to the fact that not all cases are being detected owing to lack of testing capacity, though much of the explanation is also down to the relatively young age of the population. A full 62 percent of the population in Sub-Saharan Africa is under 25, and severe illness appears primarily to afflict the elderly.

People subsisting on the bread-line, who have no choice but to leave their home to earn a meagre living, are more afraid of dying of hunger than of COVID-19

However, the continent's large, densely populated cities with inadequate sanitation and weak healthcare systems are cause for concern. Hand hygiene is difficult without access to running water. A country such as Uganda has 65 intensive care unit beds for a population of 45 million, while Malawi has just 25 for 17 million inhabitants.

Maintaining social distancing is also not as achievable as it is in Denmark, where groceries can be delivered to our door. People subsisting on the bread-line, who have no choice but to leave their home to earn a meagre living, are more afraid of dying of hunger than of COVID-19.

In the second wave, the crisis will take its toll on fragile economies. The World Bank estimates an economic loss of USD 37-79 billion due primarily to a decline in trade. It will be more difficult to export commodities and natural resources such as minerals, metals and oil. The World Bank is also forecasting a decrease in the remittance inflows to Africa from expatriated workers abroad. Tourism is suffering likewise, with the worst decline set to impact countries such as Kenya, the Seychelles and South Africa.

Another problem is the decline in foreign investment. More vulnerable economies make it less attractive for investors to commit to ventures in the African countries, for example, those that finance the major state infrastructure projects that would otherwise boost the economy.

In the long term, the coronavirus may pose challenges that we would not expect to encounter in the strong Western democracies. Extended powers vested in authorities have traditionally been difficult to revoke once they have been established. Egypt, for example, was in a state of emergency from the assassination of President Anwar Sadat in 1981 to 2012.

There are also examples of authorities using the situation in order to target minorities. In Uganda, where homosexuality can carry a life sentence, 20 members of the LGBT+ community were recently indicted for disobeying the ban on congregating.

It will be interesting to see if the elections scheduled for May in Burundi and Malawi and the presidential elections in seven other African countries later in 2020 can go ahead.
It is in the West's best interest to turn its attention to Africa as soon as it has the capacity to do so. Both in order to safeguard exports to the continent – e.g. wind, water, electricity and infrastructure – but also to prevent the complete collapse of African economies and livelihoods.

There are crucial differences between the corona crisis and the financial crisis. The current crisis appears to be hitting global trade harder, and this will have severe consequences for Danish exports.
News