Solar Foods in Finland will receive EUR 8.1 million in a buyer credit guarantee from EKF in a financing arrangement of EUR 15m together with Danske Bank and Finnvera funding a protein factory with groundbreaking new technology 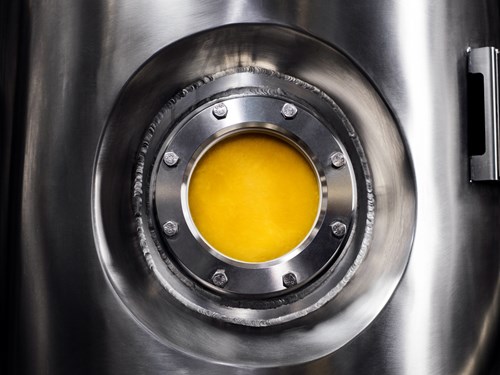 Photo: Solar Foods
Maybe not quite out of thin air. However, it is primarily with the help of electricity, air, and not least, production equipment supplied by GEA Process Engineering A/S that the Finnish company Solar Foods can produce their groundbreaking, patented protein, called Solein. The technology, which was also recognized in NASA's Deep Space Food Challenge is among the purest and most sustainable protein yet to be produced.

"It is a really exciting project, which can turn out to be extremely influential on the way we produce protein and on how much this affects greenhouse gas emission," says Thomas Hovard, CCO of EKF Danmarks Eksportkredit.

"This financing arrangement required the unanimous willingness of many parties to speed up implementation of the green transition through new technologies. This is not just financing for Solar Foods, but a breakthrough where commercial banks and start-ups can work together at an increasingly earlier stage" says Pasi Vainikka, Managing Director of Solar foods .

The technology from Solar Foods is therefore an important step on the way to developing an environmentally efficient food system. Proteins, together with fats and carbohydrates, constitute the macronutrients in our diet, and they are typically found in meat, fish, poultry, dairy, and eggs, but also, for example, in plant-based sources such as soya beans.
The guarantee from EKF will be issued under Eksportpakke II since it involves a new technology that contributes toward the green transition and will have a major impact as well as great export potential.
The goal is to produce protein in 2023, and Solar Foods has great technological and commercial potential to exert extensive influence on how foods are produced.

The technology needs to be scaled

Solar Foods has already proven that the technology works – in a pilot facility – but Factory 01, which will be co-financed by EKF also needs to demonstrate the scalability of the technology. If the technology is scaled as expected, Solar Foods expects to establish additional factories with far greater capacity than Factory 01 which produces on an industrial scale and at prices that are competitive relative to meat and plant-based alternatives.
The factory will be located in the southern Finnish town of Vantaa 10 minutes from Helsinki airport. The construction of the factory will commence in June 2022.
As mentioned, EKF will provide a buyer credit guarantee of EUR 8.1 million, including risk premium, to Solar Foods as part of total debt financing of EUR 15 million for the establishment of the protein factory. Of the total financing, Danske Bank will take a risk share of 10 percent, while Finnvera and EKF will share the remaining 90 percent.

EKF to become part of Denmark´s Export and Investment Fund