EKF has participated in its first financing of a project employing floating wind technology in France. 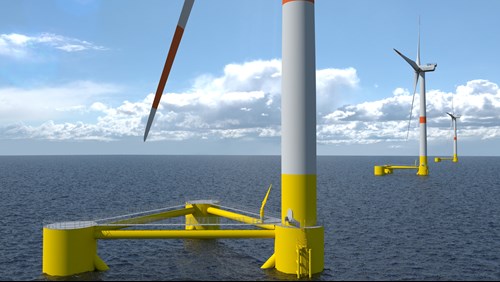 “That we now participate in floating offshore wind which has a huge potential, especially in places where sea depths otherwise preclude bottom fixed offshore wind farms, is a very important step for EKF. We are very pleased to be a key financing partner in this transaction. It is an important project and a critical step to cement the EU's lead in the green energy transition and our quest for energy independence, so we are happy to collaborate with Ocean Winds on EFGL”, says Peter Boeskov, CCO at EKF.

Floating wind technology has already been tested but remains at an early stage. This project uses the WindFloat© technology (owned by Principal Power Inc.), which was first used in Portugal in 2011, in the form of a single prototype floater and using a 2MW Vestas turbine, that turned into WindFloat Atlantic, a 25 MW wind farm currently under operation and led by Ocean Winds since 2020, and most recently in Scotland in 2020 with the world's largest floating wind project to date of 50MW, also using Vestas turbines.

The wind turbines for EFGL are assembled on floaters at the quayside in Port-La Nouvelle harbor and then towed by tugs to the project site in the Mediterranean Sea. At the EFGL site, the floater is moored to the seabed via three pre-installed anchors and connected to the grid by a 66kV power export cable that is installed by the French Transmission System Operator.

The underlying technical risks associated with a floating wind project have been particularly in focus since EKF was invited to participate in the EFGL project two and a half years ago.

"With the knowledge EKF has gained from this project, we are now clearly in a strong position to support Danish turbine exports globally in relation to the upcoming wave of commercial-scale floating offshore wind projects of 250MW and upwards in France and elsewhere that are anticipated in the coming years", says Vice President Christian Lambert from the Global Wind department at EKF.

Ocean Winds, a joint venture between the French energy company Engie and the Spanish energy utility EDPR, is behind the project. EKF already has a strong relationship with Ocean Winds through the previously funded bottom fixed offshore wind projects - Moray East, UK (950MW) and Seamade, Belgium (487MW), where Ocean Winds was the project sponsor.

Ocean Winds owns 80 percent of the project, while the remaining 20 percent is owned by the French State through the state-owned company Banque des Territoires (Groupe Caisse des Dépôts).

“We are very proud of the trust of our partners, as well as the hard work of our teams, in achieving this financial close. Our EFGL project is once again setting the reference not only in terms of technology, stakeholder relations, and environmental protection but now also in terms of financing through an innovative and pioneer non-recourse project finance for floating wind. These are all key elements in preparation for French commercial floating tenders”, says Grzegorz Gorski, CCO of Ocean Winds.

Today, most of France's energy comes from nuclear power, which France is working to reduce so that by 2035 only 50 percent will come from nuclear power plants. Here, the floating turbines are an important step in this transition.

The project marks the first time that a Financial Close is being achieved with this size turbine on a floating wind platform. EFGL also sets a precedent as the first non-recourse project financing, with a structure closely resembling a traditional bottom fixed offshore wind project.

The strong relationship between EKF, Vestas, Ocean Winds, and the banks makes a difference

“We are proud that EKF and the consortium of international banks experienced in the financing of wind projects have reached an agreement to finance EFGL as their first floating project. The strong relationship between EKF, Vestas, Ocean Winds, and the banks makes a difference and marks a big step forward in commercializing the development of floating wind.”, says Benoît Gilbert, Senior Director Offshore Vestas Mediterranean.

Solar Foods in Finland will receive EUR 8.1 million in a buyer credit guarantee from EKF in a financing arrangement of EUR 15m together with Danske Bank and Finnvera funding a protein factory with groundbreaking new technology
News

EKF has supported a project in Southern Ghana deploying the new technology with a buyer credit guarantee of USD 43.2m in a 10-year door-to-door debt financing transaction.