Tuesday morning, November 30 2021, Thomas Hovard, Chief Commercial Officer in EKF Denmark´s Export Credit Agency (EKF), signed an agreement involving the largest Export Loan in the history of EKF at a ceremony in the Turkish Ministry of Finance in Ankara.

The project consists of a 200 km electric high-speed train line in the north-western part of Turkey.

”We are very proud to have provided a green loan for a sustainable railway project in Turkey and thereby helped to secure jobs in Denmark”, says Thomas Hovard. 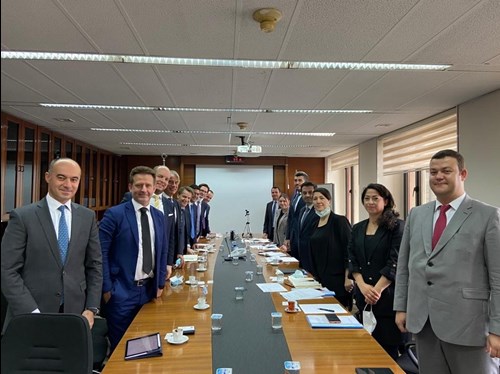 Several foreign banks are also involved in the project, including one of the largest, namely Standard Chartered Bank, who holds EKF in high esteem.

Standard Chartered Bank was looking for lenders for the project who have a strong rating and substantial experience with infrastructure projects, and we became their preferred choice

”Standard Chartered Bank was looking for lenders for the project who have a strong rating and substantial experience with infrastructure projects, and we became their preferred choice”, says Thomas Hovard.

The railway project covers the distance from Bandirma via Bursa and from Yenisehir to Osmaneli in the north-western part of Turkey. The main contractor behind the project is the Turkish company Kalyon Holding, who is a new business partner to EKF.

"I would like to thank to everybody in EKF and PAA PF. This is the first MoF of Turkey transaction of this kind and a very creative as well as out of the box solution from EKF, which is the most outstanding European ECA. It is always a pleasure and honor to have the chance to collaborate with EKF, and I look forward to collaborating on more projects", says Hasan Kutluhan Çevik, Strategy and Business Development Director in Kalyon Holding.

EKF subsequently syndicated the loan by using, among others, reinsurance through other export credit agencies in Spain (CESCE) and Poland (KUKE). This helps to reduce EKF's risk to EUR 33.6 million. The total financing amount is EUR 1.100 million (plus premium) consisting of an EKF Export Loan, EKN/SEK-financing from the Swedish export credit agency and a commercial group of local banks. The loan fulfills the requirements of the EU-taxonomy for sustainable financing and can therefore be classified as a green loan in the market.

“This is standard procedure in EKF as we already have a lot of commitments in Turkey. Instead of reserving our entire capacity for one country only, reinsurance allows us to optimize the overall use of our capacity”, says Søren Abildgaard, Senior Vice President in EKF.

The railway project generates contracts of a couple of hundred million Danish Kroner.

“That´s because the Turkish Government is obliged to buy from Danish suppliers for a fixed minimum amount in order to follow the letter of the agreement,” says Thomas Hovard.

The Export Loan is a good example of how Danish suppliers manage to obtain new orders because of EKF's involvement and good reputation among other export credit agencies as well as among global, financial players.

“These are orders that would have never reached Denmark, if EKF wasn't involved in the project, Thomas Hovard explains.