On Wednesday 15 January Jan Vassard, Deputy CEO at EKF, signed a Memorandum of Understanding (MoU) with the state-owned Brazilian development bank BNDES. The agreement will benefit Danish exporters of wind turbines in particular.

BNDES is the main financing agent for development of industry and infrastructure in Brazil and has been so since it was founded in 1952. Gustavo Montezado, CEO at BNDES signed the MoU on behalf of the bank.

The MoU with BNDES could mean a great deal to Danish export to Brazil, not least to Danish exporters of energy technology. Brazil is facing a considerable expansion of its energy infrastructure and they will focus on wind energy in the years to come. This agreement sets the framework for the future cooperation between EKF and BNDES on securing financing for the expansion of the wind sector in Brazil.

The agreement with BNDES could also benefit other Danish export sectors. One example is a former collaboration between BNDES and EKF on the financing of Danish supply to the Brazilian cement sector.

In recent years EKF has been involved in various activities aimed at promoting Danish exports in the Brazilian market. Thus, EKF has worked closely together with the Danish Trade Council and relevant trade associations on promotion campaigns in the Brazilian agricultural and food industry during the last few years. 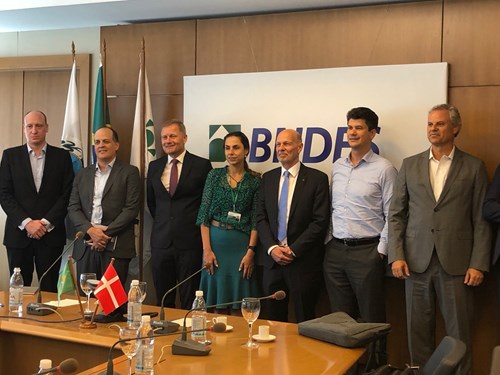