Denmark's green future fund is in operation: EKF has the first projects in line

EKF has been allocated more than half of the funds, DKK 14 billion, in Danmarks Grønne Fremtidsfond ('Denmark's green future fund'). The funds will help to achieve CO2 emissions reductions and retain Danish jobs.

An appropriation of DKK 25 billion was made by the Government for the new fund, DKK 14 billion of which is earmarked for export promotion through EKF. In addition to EKF, Danmarks Grønne Fremtidsfond consists of IFU (Denmark's investment fund for developing countries), Vaekstfonden (the Danish Government's domestic business promotion and investment fund) and the Danish Green Investment Fund. 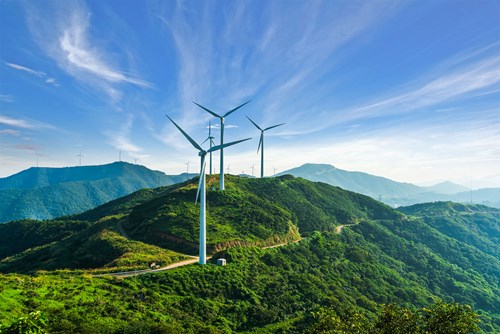 The funds held by Danmarks Grønne Fremtidsfond will promote the energy transition, reduce global carbon emissions and boost exports of Danish climate technologies. And when asked, CEO of EKF, Kirstine Damkjær, explains that this mission is a cornerstone of EKF by virtue of its long-standing engagement in international wind projects especially. The CEO highlights that the fund is good news for both Danish exports and the energy transition.

"This initiative will be a major driver for the energy transition and employment in Denmark. Danish exporters are world leaders in clean energy technologies, and the wind sector alone provides 33,000 jobs," she explains.

In recent years, EKF has registered increased demand for Danish climate technologies and the crucial financing for realising green projects. EKF already has three wind farms lined up for the newly established fund, and politically, Minister for Industry, Business and Financial Affairs Simon Kollerup recognises the positive impact of the wind sector.

"Wind energy has proved a great success, not only for the climate, but also in driving the clean energy boom now in prospect for Danish industry in terms of developing and exporting climate solutions. I´m therefore delighted by the inception of Danmarks Grønne Fremtidsfond with such high profile investments in wind turbine energy," says Simon Kollerup.

Two of the three new wind projects are the offshore wind farms Seagreen in Scotland and Changfang and Xidao in Taiwan. Both wind farms will be supplied with wind turbines from MHI Vestas Offshore Wind, where Danmarks Grønne Fremtidsfond was a welcome backer.

"At MHI Vestas, we are helping to power the global energy transition with competitive offshore wind. Having backers like EKF has been crucial for us as a Danish export business in realising the financing for our project on a new offshore wind market like that in Taiwan. The involvement of EKF in offshore wind projects provides a stability that facilitates an effective capital structure, including in more mature wind markets. We predict that access to Danmarks Grønne Fremtidsfond for our offshore wind projects will help to ensure sustained production, R&D and agreements with business partners and sub-suppliers in Denmark," says Chief Sales Officer Henrik Jensen.

"EKF's commitment to boosting exports of Danish wind technology was a crucial factor in securing the order for the unique Zeewolde wind project in my home country, the Netherlands. Hence, we are pleased to see the initiative on Danmarks Grønne Fremtidsfond, which will allow EKF to continue to support the growth of renewable energy for the benefit of society", says Nils de Baar, adding:

"The Zeewolde project is special and marks a great step for the renewable power supply of the region. Together with our partners, we are looking forward to repowering Europe’s largest community-owned wind farm that is also the Netherlands’ largest onshore wind project.”

According to projections from EKF, these ventures will be instrumental in creating and retaining 2,300 jobs in the Danish wind turbine industry. Meanwhile, with an increase in Danish wind-technology exporters' order books, the projects under Danmarks Grønne Fremtidsfond will help to drive global decarbonisation, says Kirstine Damkjær, adding:

"Each time EKF participates in a renewables venture anywhere in the world, the clean energy generated displaces the more pollutant energy sources that are also utilised. This is a virtuous spiral that Danmarks Grønne Fremtidsfond will serve to reinforce. The three wind projects we have ready so far for the fund are projected to achieve an emissions reduction of 64 million tonnes of CO2 equivalents over their useful life. This is more than Denmark's total emissions in 2019."

EKF Denmark's Export Credit Agency was established in 1922. Guarantees for green investments, primarily for wind turbines, account for around 70 percent of EKF's total transactions. Solar power plants, biomass power plants, biogas plants and all types of energy-efficient solutions are other examples of export orders that EKF has helped to finance for Danish export businesses.

According to BloombergNEF and EKF's North American counterpart, USEXIM, EKF financed more renewable energy than all the other export credit agencies in the OECD put together in 2017 and 2018.

EKF was involved in financing 150 wind projects in 36 countries with a total capacity of 23.8 gigawatts. This is equivalent to the annual electricity consumption of around 23 million households.